Welcome to the Kalsotra Laboratory!

The research in Kalsotra lab brings together critical ideas in the fields of molecular and developmental biology and offers a robust framework to better understand how, when, and where particular mRNAs are translated into proteins.

We are particularly interested in understanding (i) how post-transcriptional regulatory mechanisms integrate with transcriptional and translational programs to ensure normal tissue development and function, (ii) why misregulation of such mechanisms results in disease, and (iii) whether these mechanisms can be leveraged to prevent or reverse specific cardiac and liver disorders. 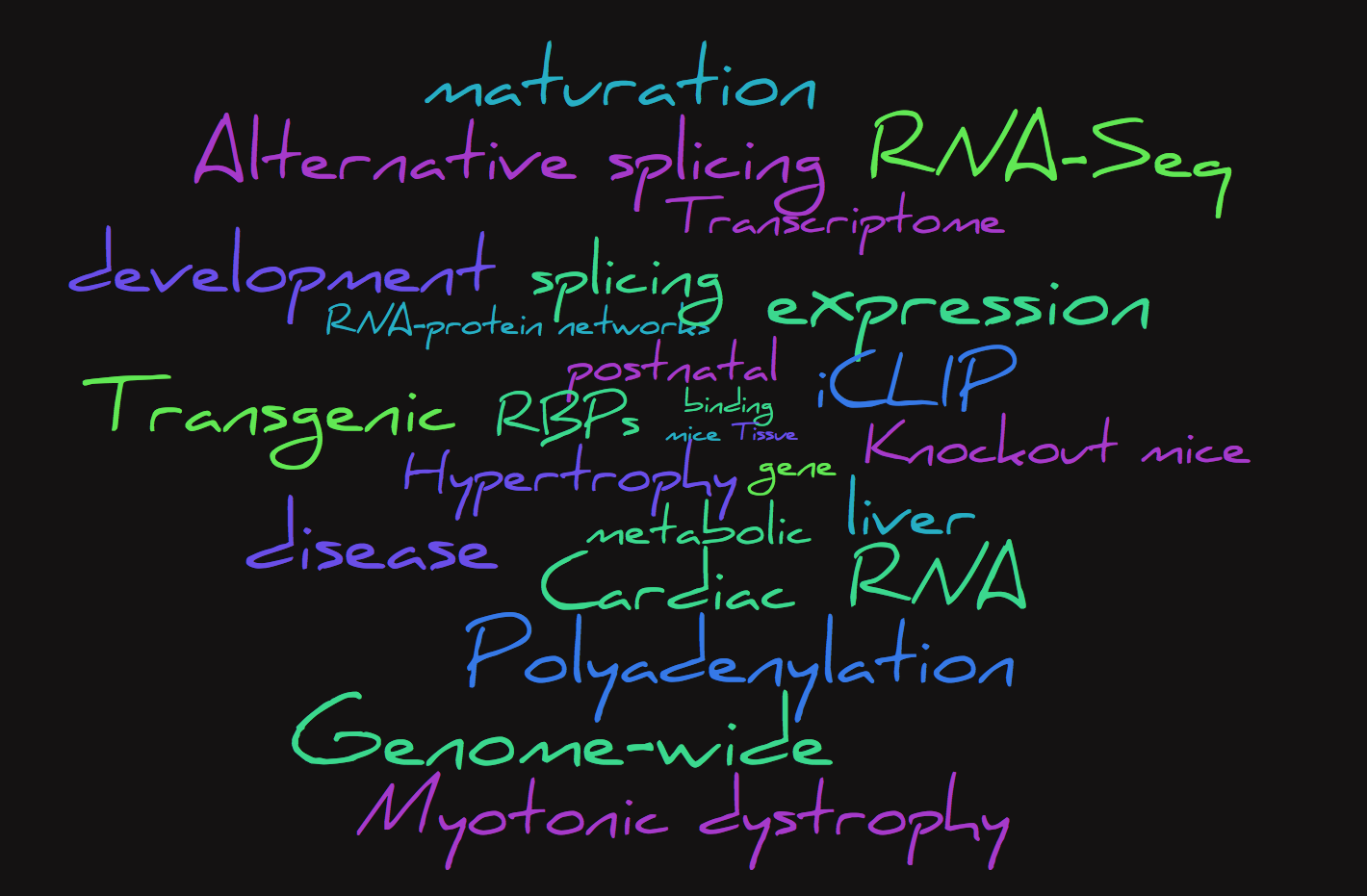 A unifying theme of our research is to identify post-transcriptional mechanisms that are key for normal tissue development, and if misregulated result in disease. Our major goal is to capitalize on these insights and apply them as therapeutic approaches for tissue regeneration and repair.

We are currently working on four major areas.

Alternative splicing is a process by which a single gene produces multiple polypeptides with potentially different functions. Over 90% of human genes are alternatively spliced giving rise to greater than 100,000 proteins from less than 20,000 genes.

Due to tight spatiotemporal control, alternative splicing therefore not only generates an extremely diverse proteome but also directs its regulated expression in response to a wide range of cues. Importantly, splicing defects are now recognized as central to various human diseases including neurological disorders, muscular dystrophies and cancer.

We are currently investigating the role that alternative splicing plays in mammalian heart and liver tissue development.

(3) Determine the biological significance of the evolutionarily conserved and developmentally regulated splicing transitions.

This project is funded in part by the National Institute of Health, American Heart Association and Muscular Dystrophy Association. Collaborators in this project include Xinshu Xiao (UCLA) and Russ Carstens (UPenn).

2. Regulation and Function of Alternative Splicing in Liver Regeneration.

The liver is responsible to carry out a large number of physiological processes, and is therefore, indispensable for organismal survival. Although the human liver possesses an exceptional ability to regenerate, it often fails to repair itself during many liver disorders.

It is estimated that over a million people die from liver failure every year representing a prominent cause of global death. This has prompted serious efforts to increase our understanding of the basic developmental mechanisms that control liver cell differentiation and function.

We have recently identified a developmentally regulated splicing network in mice that is redeployed during adult liver regeneration.

(1) Delineate the mechanisms that are instrumental in re-initiating the developmental splicing program in response to liver injury.

(2) Determine the functional importance of splicing networks in promoting cellular repair and regeneration.

These studies will provide us with important insights into how quiescent stem cells and hepatic progenitors may be instructed to divide, differentiate and grow during different liver disorders.

This project is funded in part by the Roy J Carver Charitable Trust, March of Dimes and Start Up funds from UIUC. Collaborators in this project include Russ Carstens (UPenn) and Sayee Anakk (UIUC).

Myotonic dystrophy type 1 (DM1) is an autosomal dominant, multi-systemic neuromuscular disorder that is a common cause of congenital and adult onset muscular dystrophy. Besides skeletal muscle, the disease also affects endocrine, cardiac, gastro-intestinal and brain tissues.

The causative mutation is a CTG expansion in the 3’-UTR of DMPK gene resulting in aberrant expression of CUG repeat containing RNA that accumulates in nuclear foci, depletes a splicing regulatory protein, MBNL1 and causes misregulation of developmentally regulated alternative splicing.

From a global screen in a heart-specific and inducible DM1 mouse model, we have recently discovered a specific defect in Mef2 transcriptional program in DM1 that results in loss of expression of its target genes including scores of cardiac microRNAs. We are currently optimizing different therapeutic approaches to correct microRNA misregulation in DM1 cell culture and mouse models.

In collaboration with Zimmerman lab, we are also testing the in vivo efficacy of their small molecule inhibitors that can release Mbnl1 from the CUG RNA in DM1 mouse models.

(1) Determine the causal contributions of MEF2-microRNA circuitry in DM1 pathogenesis.

(2) Screen microRNAs as therapeutics to ameliorate the cardiac dysfunction in the DM1 mouse model.

This project is funded in part by the National Institute of Health and Muscular Dystrophy Association. Collaborators on this project include Steve Zimmerman (UIUC), Wawrzyniec Dobrucki (UIUC) and Tom Cooper (BCM).

4. mRNA polyadenylation and translation control in heart development and disease.

As transcription terminates, the 3’-end of most eukaryotic mRNAs is cleaved and polyadenylated. Polyadenylation adds a 3’-poly(A) tail that is bound by the poly (A)-binding proteins to regulate mRNA stability, localization and translation.

More than 50% of mammalian genes use alternative poly A sites, which affect the mRNA’s accessibility to regulatory factors such as microRNAs and RNA binding proteins. However, how alternative polyadenylation is itself regulated or what are its physiological functions are poorly understood.

We are currently studying the regulatory programs that control alternative polyadenylation during mouse heart development. We are also characterizing the roles of poly (A) binding proteins in cardiac development and disease

(1) Characterize the genome-wide alternative polyadenylation patterns that are regulated during mouse heart development.

(2) Identify RNA binding proteins that affect the choice of poly A site selection in cardiomyocytes.

(3) Determine the role of Poly (A) binding proteins in cardiac development and cardiac hypertrophy.

This project is funded in part by the National Institute of Health and American Heart Association. Collaborators on this project include Bin Tian (UMDNJ), Nicholas Conrad (UTSW) and Jing Yang (UIUC).